Wavepower Anti-bullying
Barnes Swimming Club expects all members of the club to treat each other with courtesy and respect. Everyone has the right to be safe and secure at the club and to be protected, so that all may flourish without fear of unfair treatment or harassment. The Club’s approach to bullying is clear: it is always unacceptable and the club will, therefore, do all it can to prevent it.

Bullying may take many forms. Any behaviour, which makes another feel uncomfortable or threatened may be construed as bullying, whether intended or not. All complaints should be taken seriously and pursued. Acting against bullying is a part of every parent’s duty of care to swimmers and of swimmers to each other, both on and off site. This policy is intended to help swimmers and their families if they are concerned about bullying and to ensure a consistent response to any bullying incident. The policy can be made available in large print or other accessible format if required.

Bullying can cause psychological damage and even suicide. Although bullying is not a specific criminal offence there are criminal laws, which apply to harassment and threatening behaviour. 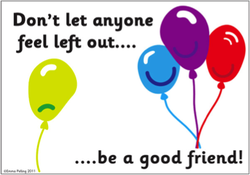 It may take the form of teasing, verbal criticismand harassment on the grounds for example that someone has different coloured skin, the way they talk, their size or their name. The following list could all constitute claims of bullying or harassment: racism, sexual bullying, negative remarks about appearance, ability, health conditions or home circumstances, nationality, religion or culture, disability, gender or sexuality, SEN or cyber-bullying. Sometimes the perpetrator is just being thoughtless. Sometimes it can be hurtful to be different or to be made to feel different. Bullying causes fear and distress for the victim and may distract him/her from their swimming. It may also affect other swimmers who witness it and it can damage the atmosphere in a squad or even in the entire club.
Examples of bullying behaviour
Physical bullying may include: fighting; damaging or hiding someone else’s belongings or clothes; setting up someone else to get the blame for a breach of club rules; initiation ceremonies.
Emotional or psychological bullying may include: excluding someone from a group, activity or place; spreading rumours, being deliberately unfriendly; unpleasant e-mails, text messages or telephone calls or unpleasant material placed on websites.
Verbal bullying may include: aggressive name calling, teasing, mockery, insults.
Sexual harassment includes making inappropriate comments about appearance and attractiveness, uninvited propositions, uninvited touching and using innuendo or inappropriate imagery.
Cyberbullying is the use of information and communications technology particularly mobile phones, email, social websites, text messages, cameras and the internet, deliberately to upset someone else.

What are the signs of bullying?
It is not always easy or even possible to tell whether someone is upset. People who feel under emotional pressure may find it hard to talk. There may be changes in behaviour, such as shyness and nervousness, demands for attention, feigned or real illness. Work and sleep patterns may change. There may be lack of concentration or withdrawal, and a swimmer who is being bullied or feels vulnerable may be unwilling to attend club.

What is expected of coaches, swimmers, committee members and parents?
All those involved in the club - and this includes committee members, swimmers, parents and coaches have a responsibility to show that they believe that any form of bullying is unacceptable - and to set an example, which reflects that view. All members of the Club should help to create an atmosphere in which bullying will be spoken of openly, taken seriously and responded to with appropriate action. A young swimmer who is being bullied should tell their parents their coach, another coach or the Welfare Officer. Adult swimmers should tell their coach, another coach or the Welfare Officer.

It is important that any cases of bullying are reported to someone whom the victim feels able to talk to. Any swimmer who suspects bullying should report it to their coach. A parent who is concerned that a swimmer (their own child or another swimmer) may be being bullied, should speak to their coach or to the Welfare Officer.

The club wants to help and it expects coaches, swimmers, parents and committee members to:
The club raises the awareness of coaches to these issues through professional third party training, and action is taken to reduce the risk of bullying at times and in places where it is most likely to occur.

Implementation of the policy
Coaches will remind swimmers at the start of each year of their responsibility to ensure that bullying does not occur and to talk to a coach if they witness or suspect bullying.

In the event of an observed or reported instance of bullying, the facts will be ascertained from the victim(s), alleged perpetrator(s) and witness(es). The individual initially contacted/witness will record who was involved, what happened, when and where. This will be passed to the Welfare Officer who will liaise with the relevant parents. The Welfare Officer will identify patterns and decide what action needs to be taken to prevent similar occurrences.

The club will try to keep parents informed if and when it may be dealing with a significant bullying situation. Parents are asked to let the club (usually the coach) know directly if they have cause for concern, either on behalf of their own child or because of rumours about incidents involving others. The club always tries to handle information discreetly, and although what coaches and committee members are told will be in confidence the club cannot promise secrecy. If matters need to be followed up the Club will do so with sensitivity. It is much easier to counter problems at an early stage.  Once investigated, every effort will be made to resolve the problem and change the behaviour of the perpetrator(s).This process will normally be carried out by the Welfare Officer.

For all incidents of bullying (whether isolated or occurring over a period of time), disciplinary sanctions will normally be applied, and may extend to suspension or in the gravest cases of severe or persistent bullying expulsion from the club. The policy is applied in conjunction with The Club’s Codes of Conduct, which can be found in the handbook or on this webstie