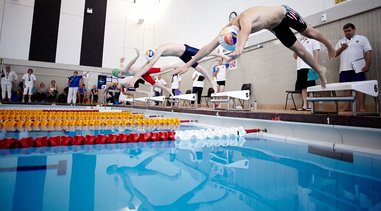 Officials Recruiting
​
​As a club we aim to recruit and train a number of officials who can then be available to help at the galas we run and attend as a club. Having qualified officials is crucial to swimming. Without them, meets cannot be licensed and swimmers' times will not be officially recognised.  Additionally, it will often be a condition of the meets we enter as a club that we provide a certain number of officials. So by becoming qualified, you can directly help our swimmers. The training is a combination of theory and practical experience where you will be mentored by fully qualified officials. If you would like to join our existing team of officials, please email the club vols.bsc@gmail.com. It really does help the swimmers and is a rewarding way to spend a gala.

Officials Roles
​
The ASA laws and rules dictate the number and type of officials that should be officiating at a gala. All these officials ensure that galas are run smoothly and fairly. The following list describes briefly the role of the various officials. If more than one is required the number is shown in brackets.

If judges disagree, then THE REFEREE’S DECISION IS FINAL.