Roxana Roman - Head Coach
Roxana began swimming at the age of 6 in Romania.  She then joined her local swimming club and progressed to competing for her country all over Europe. Roxana loves swimming and likes to share her passion for the water by teaching other swimmers to love it as much as she does. As a coach, Roxana has had success with many swimmers at National level and with many more at Regional and County level.  Before joining Barnes, she was the Assistant Head Coach at Leander Swimming Club where she was in charge of the two squads equivalent to our Performance 1 and 2 Squads. In 2016 Roxana achieved the Level 5 Coaching International Age Group, the highest qualification of the American Swimming Coaches Association (ASCA).
roxroman.bsc@gmail.com

Bridget Trefgarne
As a youngster, Bridget swam competitively for Zimbabwe at regional and international level.  She took her teaching qualifications in 2003, and has worked predominantly for Chelsea and Westminster, before more recently joining Barnes Swimming Club.  Bridget enjoys watching the children progress up the club ladder as they improve their technique, stamina and confidence.  She also believes it’s a valuable counter balance for intensive periods spent in the classroom – and a skill to be enjoyed throughout all stages of life.
bridgetswimming.bsc@gmail.com

Being very active and interested in sports led Dovile to take a degree in Physical Education.  In 2015 she graduated from Lithuanian University of Educational Sciences. She then continued her education in London, and in 2017 she completed a master’s degree in Exercise Physiology.  All the while, keeping up with her training and swimming.

Milton Sills
Milton is a highly respected (and loved) junior age group teacher with over ten years experience with the same club. Milton is a qualified level 3 Club Coach who has coached for Barnes Swimming Club for many years.
coaches.bsc@gmail.com 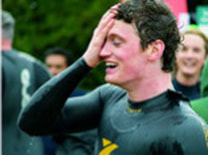 Bradley Sills
Bradley is an ASA Level Two coach. He started coaching at Barnes Swimming Club in September 2010 and took over the D2 role in September 2011.  He has swum competitively from the age of ten as a member of Wandsworth Swimming Club and continues to compete for BSC.  Bradley recently graduated from St. Mary's College University in Twickenham where he studied a joints honours degree in Sports Science and Media and was chosen by Omega to work for them at the London 2012 Olympics and the 2014 winter games.
coaches.bsc@gmail.com

Loriellen Eirene Patsi
Loriellen has been swimming since the age of 4 on and off. She was a club swimmer in Greece for two years as a teenager and came to London to go to university. Having completed an undergraduate degree in Psychology she went on to do her masters in Sport and Exercise Psychology at Roehampton University due to her love for swimming. She is now a trainee sport psychologist working with athletes on the psychological aspect of enhancing sport performance and combines this with lifeguarding, swimming teaching and coaching. She has recently gone back into club swimming after a decade

Nabeel Showman
Nabeel started swimming at age 7, and he has many years experience as a competitive swimmer up to a National level. He started coaching at Barnes back in 2018 before taking a hiatus for work, and has recently returned to work with all age groups across the club. His experience in the water helps him to assist with every athletes development.
​

Sara Lagana
Sara's passion for swimming brought her to start her career in 2010, coaching in a swimming pool in Italy for 4 years. In these years she combined her knowledge received during her high school studies in Education.
Sara developed a learning environment that was stimulating, fun and diverse to accommodate all people.
She looks forward to seeing the progressive improvement of the students in the water and having fun!

Tom Owens
Tom joined Barnes in 2010 as a swimmer and has many years of swimming experience, having been a National finalist both in the pool and open water for Barnes SC and the University of Bath. He has been a coach for 5 years, having gained experience as a volunteer. Tom has coached all age groups and abilities across the club, and his knowledge helps him to assist every swimmer’s development.

Phil Pellegrini
Phil has a lifelong passion for sport with over 25 years’ experience training, competing and coaching in rowing, triathlon and swimming. As a coach, he enjoys channelling his passion and experience into helping swimmers achieve their highest potential while pushing them to explore and improve their abilities. He strongly believes that commitment, consistency and patience are the keys to progression.
Phil is also a qualified Level 3 Personal Trainer and UKSCA Level 1 Strength & Conditioning Coach.